William Brock came to Scugog from Cobourg as a labourer in the 1860's – in the days of the grain trade. He settled in Prince Albert where he worked for the Cowan Bros. While in Prince Albert, he met Samuel Barber – a local merchant. William married Samuel's daughter Sarah Barber.

When the railway came to Port Perry, the town quickly became the main trading centre in the area. It basically closed Prince Albert down….. everything moved to Port Perry…..and so did William Brock.

In 1881 William opened his store called W. Brock. It was originally located on the north west corner of Queen Street and Perry Street where the Piano Café is now located. William sold dry goods, furs, clothing, footwear, china, linens, yard goods…..it was ‘the old general store.' One key item that he sold a lot of was coal oil. William's store burned in the fire in 1884. He re-opened in a new location on Queen Street, where Adorn is today. William found a niche in ‘fire sales' – selling goods that were slightly smoke damaged.

William relocated to the south side of Queen Street – where Brock's ladies wear in now located. The building was in the Ross block.  William was joined by his three sons; Frederick, Harold and Harry, in the family business. William passed away in 1917. The boys changed the name of the store to Brock Bros. Next time you are in today's Brock's ladies wear shop, look up on the wall at the cash desk and you will see the original W. Brock sign.

Frederick married Hanna Sophia Parr from Blackstock. Her family owned the Blackstock store and she had worked there growing up. Hanna Sophia was the first woman to have a strong involvement in the family business. Fredrick was joined in partnership with their son Arthur and the name was changed to F.W. Brock and Son. This is the name that you can see embossed in painted gold letters above the ladies wear store's front door under the awning. There is no modern sign on the ladies wear storefront today, so as not to detract from this historical lettering.

In the late 1920's, Frederick and Arthur expanded to the east side of the building that now houses our Men's wear shop - but in the back only. The front of this building was the Standard Bank. Frederick and Arthur opened a Red and White grocery franchise that was supplied by National Grocer in this space and opened up the back door for business. Later, the Standard Bank relocated to where the TD Bank is today and Arthur opened a men's wear shop in the front of the store were it remains today.

Picking up on the current trends, Frederick and Arthur also added wallpaper and linoleum flooring to their merchandise mix. They set up a room on the second floor. The walls were lined with rolls of wallpaper and the linoleum was housed on large rolls. Customers would sit and be presented the wallpaper patterns, one by one.   The Brock family still have the chairs and a selection of the wallpaper.

In 1930, at age 25, Arthur married Marguerite Jackson. At that time, linoleum had become a big business for Brock's. Arthur realized he was missing out on a great opportunity by just selling the linoleum – he needed to install it as well. Linoleum was extremely heavy. Arthur, being young and fit, enrolled in a course to learn specialized techniques in laying linoleum. He learned how to lay it with special inlays (pictures or images), which was popular and new at the time. It was this linoleum business that helped Brock's survive the depression.

In the 1950's, Brock's went out of the grocery business. Frederick passed away in 1955. Arthur changed the name to A.W. Brock Department Store. Business continued as usual. Major changes were not necessary, for business was prosperous after the war. Arthur was selling clothing, footwear, toys, yard goods, wool and knitting and sewing supplies, blinds, drapery and drapery hardware and wallpaper. The trend in flooring changed from linoleum to tile and carpet and as always, Arthur changed with times.

As Arthur aged, he operated the business with the help of his wife Marguerite and longstanding employee, Audrey Geer. His son William (Bill) had become a high school teacher but helped his father keep the books after school hours.

In 1983, Bill was still teaching full time. Bill's wife Claudette began to help out at the store – first with window dressing, and eventually with buying trips to Toronto and managing the everyday operation of the business. Once again, it was time for some changes…it was time to focus on fashion and become a little less of a department store. Bill and Claudette phased out the businesses of  blinds, drapery hardware and wallpaper. They focused on family fashions, footwear, linens and yard goods, wool and sewing accessories. They repainted the store in the traditional green that you see today replacing the red of several decades. Bill and Claudette introduced the idea of ‘specials' and clearance sales to Brock's. They also established the infamous Back of the Store Tent Sale that people flock to each summer.

In May of 1993, Marina Brock took over operations of the store. Bill continued doing the book keeping for a few years and retired in 1996. Claudette stayed on and worked with her daughter helping with the buying and other duties. Juliana Brock joined her sister in 1996.

Marina and Juliana began by completely redecorating and the store – some paint, and new pine fixtures – while always maintaining it's old fashion charm. The old tiles that Arthur had put down on the floor were pulled up to show the original hardwood from the days of Frederick and William. New buying, merchandising and marketing strategies were put into effect. They removed the department store image to focus primarily on specialized brands of fashion, footwear, outerwear and accessories. Marina and Juliana implemented barcodes, point of sale systems and introduced the “Brock's Gold Card”. They expanded the Brock's business to include “four store fronts under one roof”. They expanded to create Brock's for Kids and Brock's on Foot in Port Perry and then expanded into the Kawarthas, with BROCK'S N*O*R*T*H in Fenelon Falls.

The next endeavour was the expansion of Brock's on Foot ; essentially doubling the square footage to position Brock's as ‘one of the largest footwear selections in the Durham Region'.

In Sept 2006 Brock's celebrated their 125th year!  They ran a "Year of Celebration" which included a special fall fashion show at the Town Hall, a Christmas cocktail charity event, an employee tea reunion, and the finale was a Gala dinner, fashion show and silent and live auction held at Skyloft in Sept 2007.  $50,000 was raised for the "Lighting the Way" campaign of the Port Perry Lakeridge Health hospital.  In preparation for the festivities, Brock's hired designer Meredith Heron of HGTV to come up with a new look for the ladies and men's wear stores - all in keeping with the traditions and history of Brock's. 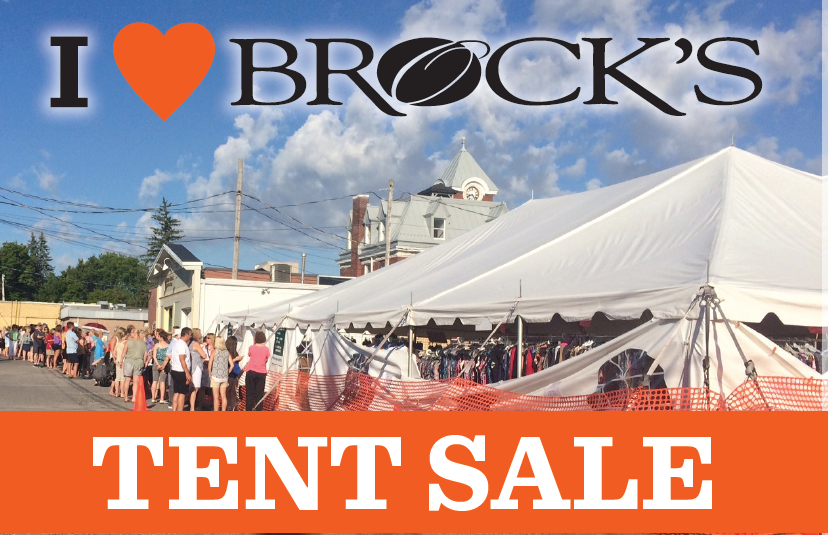 Today, Brock's is a well known destination for quality fashions and footwear. People flock to the store each year for the ANNUAL TENT SALE held usually the 3rd Friday and Saturday in July. Brand name clearance and discontinued fashions and shoes are sold at crazy, rock bottom prices.

The next generation are already learning the ropes!  Juliana and Marina's 3 daughters, in university and college, help out as sales associates, with computer projects and Tent Sale prep while Julie's two younger daughters currently work in ladies wear and help in receiving. The other two Brock siblings, Michael and Peter, help out the family at events and offer up the services of their kids - the 5 Brock cousins - to help at Tent Sale and to carry cartons of shoes upstairs. It is truly a family affair!

During the 6th generation, Brock's underwent a restoration project in May of 2018 to restore its parapets and finials on top of the building. This restoration was based on a photograph from 1911 that showed the building with 2 peaked parapets at the roofline and stone finials adorning the rooftop. Look below and I think you will find that it looks just like the picture!  Special thanks to Chris Fleming and his team at Fleming Heritage Restoration for the amazing craftmanship and attention to detail on this project! Also thanks to the Township of Scugog for their participation in this project through the Scugog Heritage Grant Program. 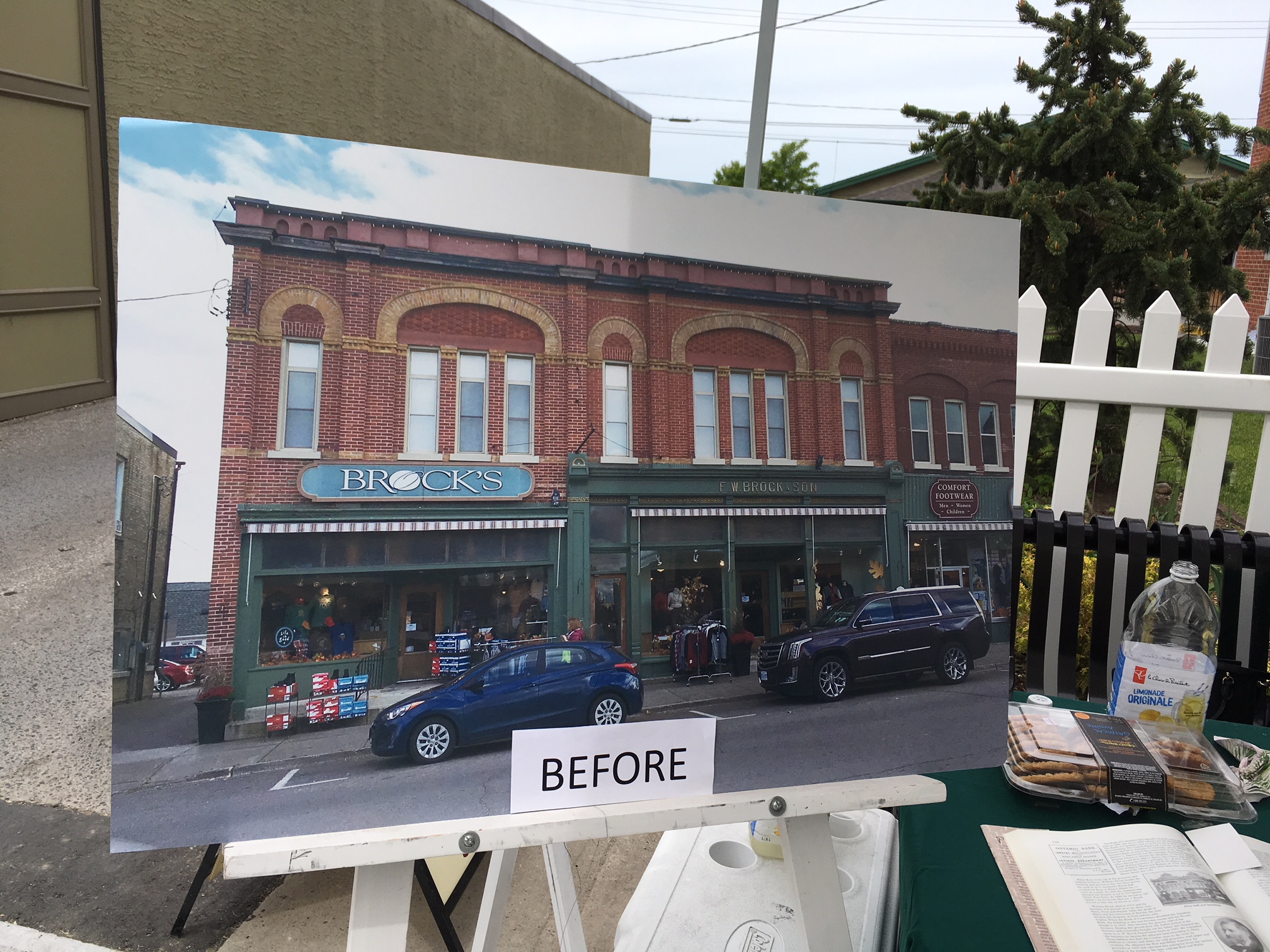 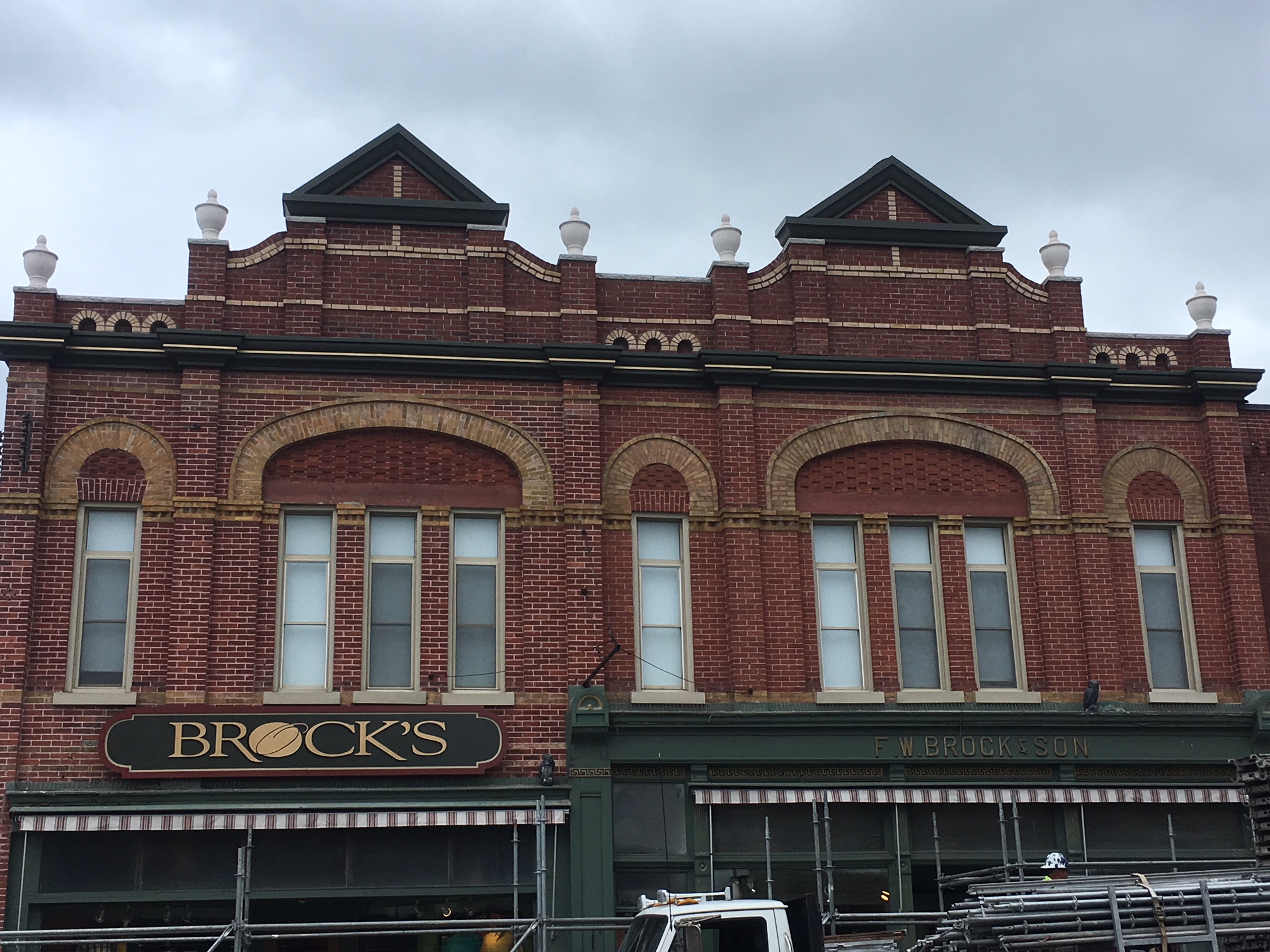 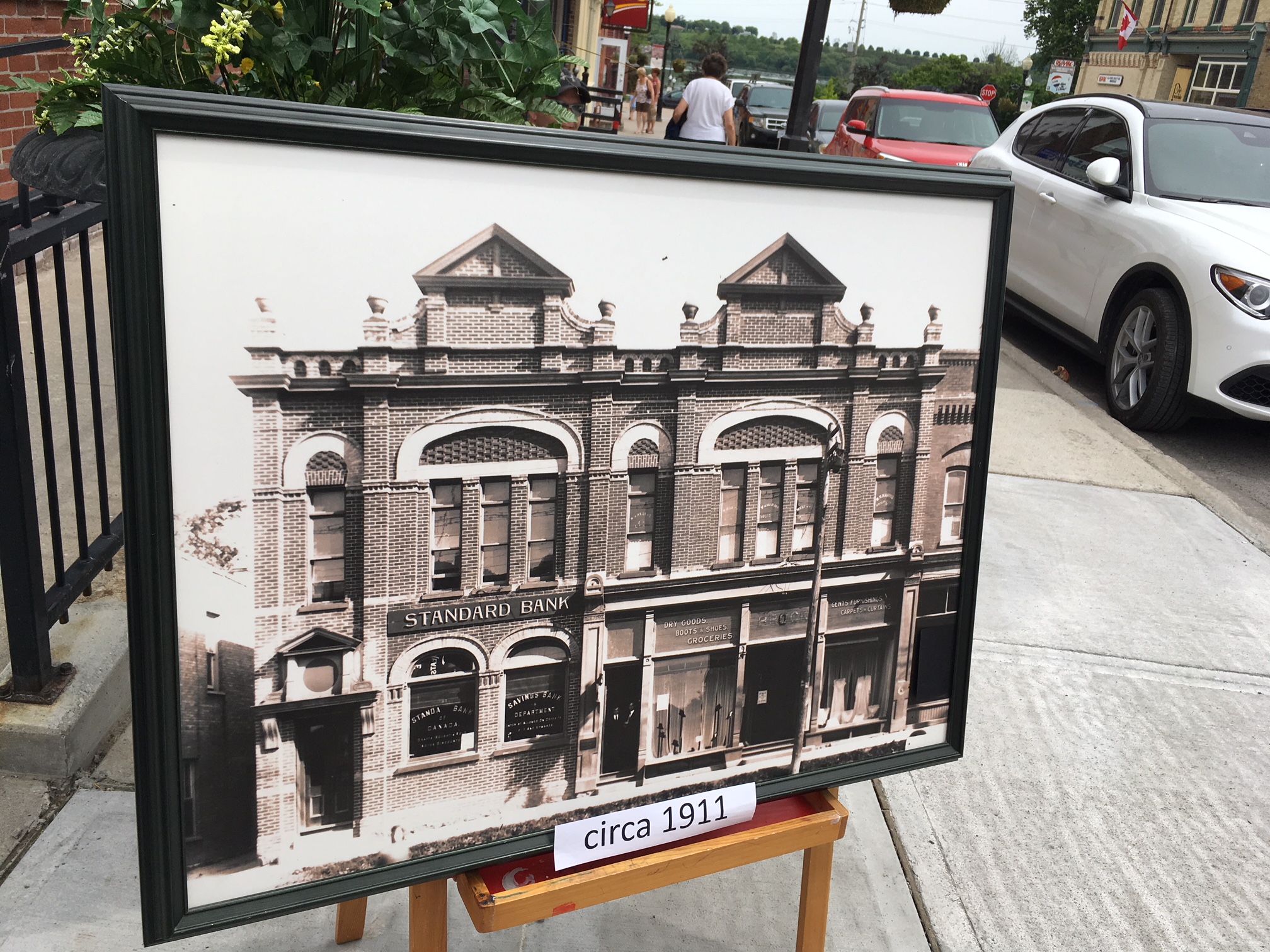